Who is Purple Pachyderm? 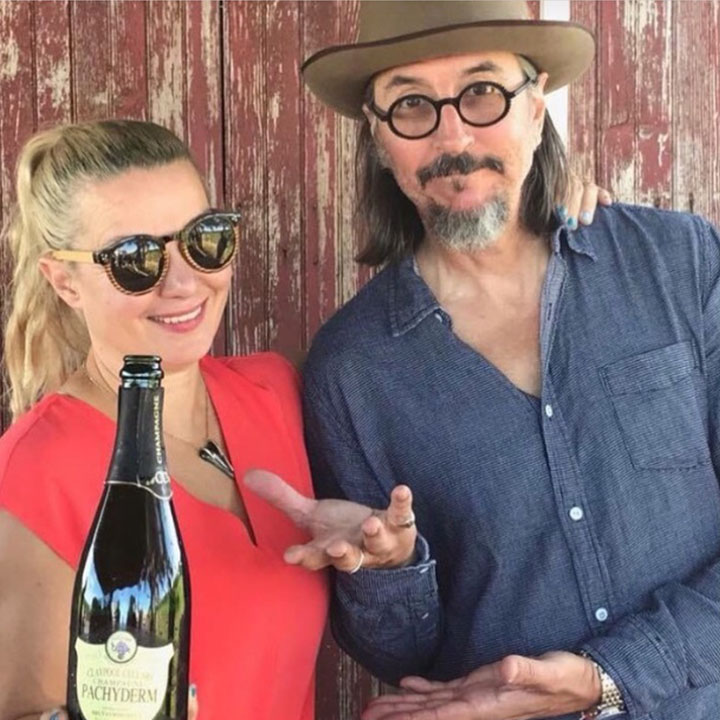 In 1994, my soon-to-be wife and myself moved to the heart of the Russian River Valley. Back then we were surrounded by apple orchards, (hence the name Gravenstein Highway– the main road into our town). As we started raising children, we noted the “razing” of the apple trees and the planting of vines. Those vines would grow to become some of the most prized Pinot Noir in California.

If you live in Hollywood long enough, chances are you are going to make friends with folks in the entertainment industry. If you lived in Detroit back in the heyday, the guys on your bowling team probably knew a lot about making cars. Living in the Russian River Valley, my pals are vineyard managers, coopers, winemakers, stainless steel fabricators and various other tradesmen who are involved in the wine industry. It was only a matter of time before bottles of Pinot Noir from friends and neighbors started showing up at our barbeques. I had never been much of a “vino guy” but as these gems started coming my way, I learned to appreciate the fabulous juice that was being created in my own backyard and soon I was hooked.

A few years later we were kicking around the notion that if we make our own wine we could fill our cellars, (well closets), with Pinot at a fraction of what it would cost to buy it retail. With a favor from another friend we were able to come up with, not just the one ton of fruit that we originally wanted, but four tons of premium Russian River Valley Pinot Noir in a year when fruit was very difficult to get. This was in 2007 and it is considered by some to be the harvest of the century for Pinot Noir in the Russian River Valley. It was with this fruit, some help from a hot-shot winemaker buddy and some wads of cash, that PURPLE PACHYDERM PINOT NOIR was born. (Of course we then found out that making wine–good wine–is a damned expensive venture and should not be undertaken by anyone who has any form of financial common sense).

The notion of Purple Pachyderm is that, as folks delve into the world of fine wine consumption, it is important to offer an option that is of the highest caliber yet not overly pretentious. All that being said, this venture has mainly been a great excuse for us to throw some “fat-wing-dinger” parties with eclectic folk, fancy food and amazing juice.

Since our 2012 release, we are finding that the hiring of cellar master extraordinaire Ross Cobb, and his immensely talented partner Katy Wilson, has been a slam-dunk move in elevating the quality of the Purple Pachyderm pinots. Having altered our focus more towards the Sonoma Coast and its glorious fruit, our wines are leaner and more delicate than ever before. Though we do still maintain a foothold in the Russian River Valley with some grapes coming from the Moore vineyard as well as our flagship Hurst vineyard, the Burgundian-minded approach of Ross and Katy give these historically fuller-bodied grapes a softer edge. We also are lucky to be able to source from such small and premium vineyards as the Rice-Spivak, Thorn Ridge and O’Connor, due to Ross’ contracts with these very selective growers.

Once again, I hope you enjoy the product of our toil and, me being a picky bastard, you should take comfort in the notion that you are drinking from my own personal stash.

We make world class Pinot Noir which showcases the soil and terroir of the Sonoma Coast Appellation in West Sonoma County. Our winemaker, Ross Cobb, specializes in making well balanced, beautiful Pinot Noirs using a Burgundian style of winemaking--picking early, with a lower brix (sugar level) which translates to a lower alcohol, lighter, delicate Pinot Noir which will pair with a number of dishes ranging from fish to poultry to steak.

Our wines have a long aging window spending a minimum of 18 months in 25-33% new French Oak barrels, and are aged in bottle before release, which lengthens ageability. We do a "Sonoma Coast" blend which has all Sonoma Coast Pinot Noir from local vineyards, as well as single vineyard designates which showcase each individual vineyard we source from. Ross has long standing relationships with all of the vineyards we source from, many of which he manages himself to our specifications. You will not find a better Sonoma Coat pinot, so look no further!

Purple Pachyderm has been producing Rosé since 2016, while other wineries may utilize the "Saignée" method (French for blood), by bleeding off the juice from the Pinot Noir to make Rosé, we source our Rosé fruit specifically for the wine, which gives you a higher quality, well balanced, crisp wine. The Russian River Valley's cool climate region is perfect for growing pinot noir grapes which produces the perfect Rose. We use Sonoma Coast Pinot Noir fruit, which spends about 7 months in neutral pinot barrels, creating its beautiful pale pink color and adding more depth than stainless steel tanks.

Rosés are generally drunk the year after harvest, although it ages longer than most. It has bright acidity and minerality with a nice mid-palate texture from the natural barrel fermentation. Crisp, refreshing and the perfect warm weather wine to sip on all summer long or drink year round with oysters, turkey or fish.

Purple Pachyderm Champagne has been with us since 2017. The non-vintage Champagne Pachyderm brut is made by Jacky Bochet and his wife, Valerie Lemoine, fourth-generation growers in the Cormoyeaux region of the Marne Valley. The grapes are the traditional Champagne grapes, Pinot Noir, Chardonnay and Pinot Meunier. The farm works in the Culture Raisonnée, using minimal chemicals and no pesticides or herbicides.

Although our speciality is Pinot Noir, in 2016 that we looked into making a custom sparkling wine and in the end decided to go for the real deal--a proper Champagne made in France. After trying many samples, traveling to France and picking our favorite we decided to work with Jacky Bochet and his wife Valerie Lemoine who share our same ideals of producing small batch wines which reflect the region where they are grown. Jacky and Valerie Lemoine are 4th generation wine makers from Cormoyeaux ​vineyards in the heart of the Marne Valley, France. They manage 8.5 hectares of Southern facing vineyards which is one contiguous plot. Jacky works in Culture Raisonnée, with minimum use of chemicals -- no herbicides or pesticides. 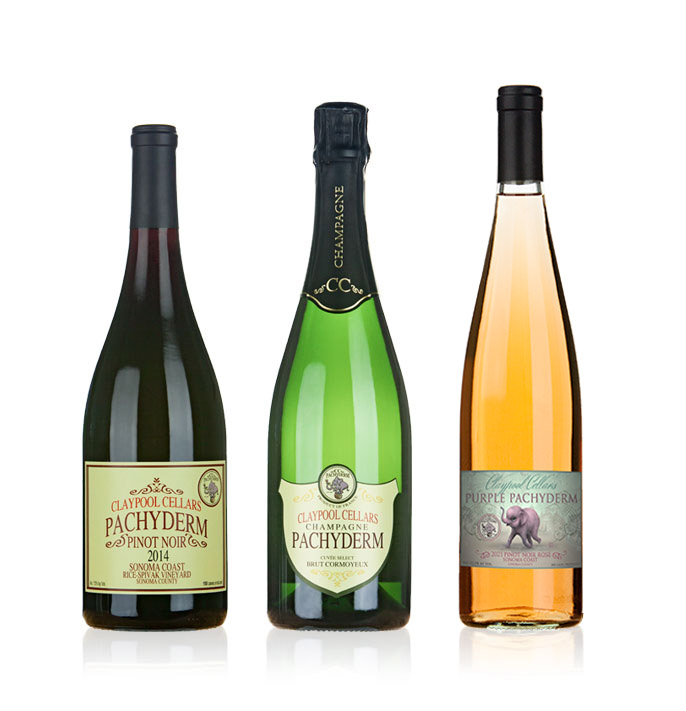 Purple Pachyderm was started as an attempt to fill our own personal wine cache, but has turned into a “boutique” wine venture and now strive to produce the best possible Pinots while still having a good time.

Purple Pachyderm Wines are are made by reknown winemaker, Ross Cobb, since 2011. Ross has been making wine since 2001 and has developed a very special sought after talent for crafting Sonoma Coast Pinot Noirs.

We farm all our vineyards sustainably, without use of fertilizers and dry farm whenever possible. All our vineyards are certified sustainable and are farmed in close proximity to the owners home and neighbors, so we are extremely consciousness of their health and safety. Our vineyards have permanent cover crops and no-till farming which prevents erosion and runoff.

We produce approximately 1200 cases a year focusing on Pinot Noir, sourced from local vineyards, including Pinot Noir Rosé and Riesling. 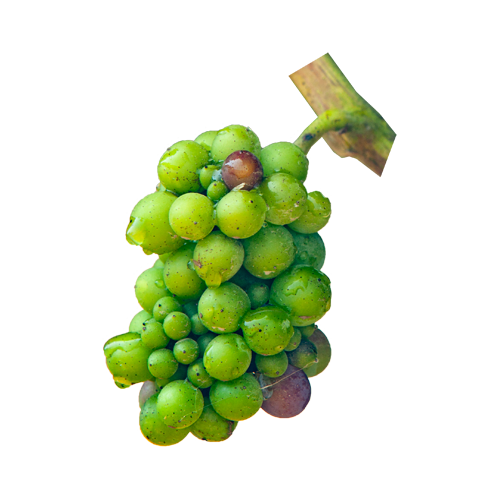 In 2007, we were kicking around the notion that if we make our own wine we could fill our cellars, (well, closets), with Pinot at a fraction of what it would cost to buy it retail. With a favor from another friend we were able to come up with, not just the one ton of fruit that we originally wanted, but four tons of premium Russian River Valley Pinot Noir in a year when fruit was very difficult to get. 2007 is considered by some to be the harvest of the century for Pinot Noir in the Russian River Valley. It was with this fruit, some help from a hot-shot winemaker buddy and some wads of cash, that Purple Pachyderm Pinot Noir was born.

In 2008, our first bottle of Purple Pachyderm was sold and was the start of out wine business. 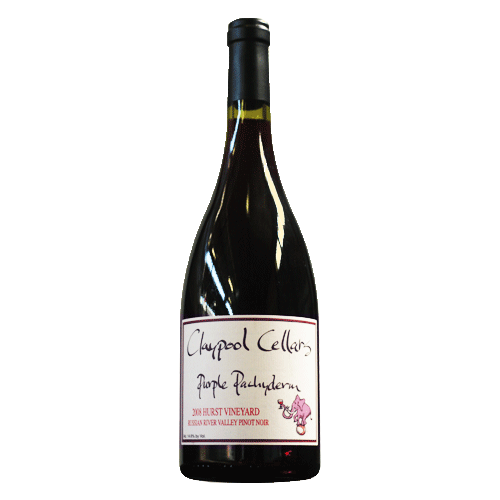 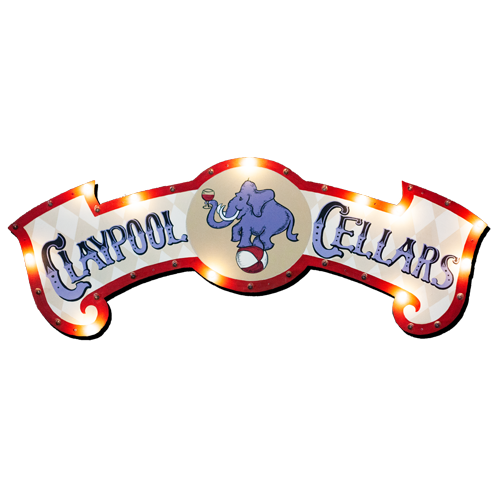 In 2010 we opened a tiny tasting room in Sebastopol (inside a train caboose inside Gravenstein Station!). It was filled with some of Chaney's father's model train collection and was a picturesque, appointment only unique watering hole. We were there for 6 years but soon found it was too small for our purposes.

We hired winemakers Ross Cobb and Katy Wilson, raising the quality and status of our wine to new heights. Arguably some of the finest Burgundian style Pinot Noir you can find in West Sonoma County. We added some single vineyard designates like Rice Spivak, Thorn Ridge, O'Connor and Doc's Ranch, and have kept our production low (1,500 cases total). Because our club had grown and the tasting room hours increased, we stopped distributing any wine and are now 99% DTC (Direct to Consumer) through the club, website and tasting room. The only restaurant which sells our wine currently is French Laundry in Napa, CA. 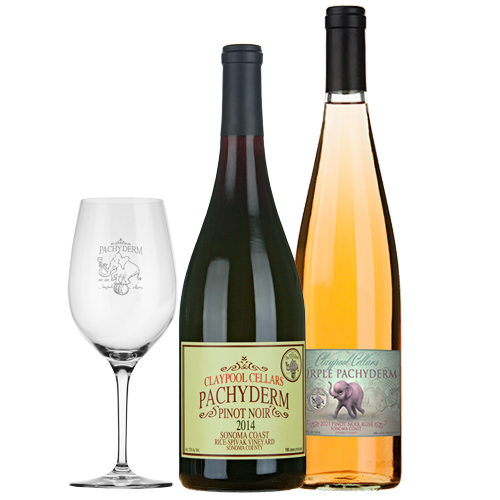 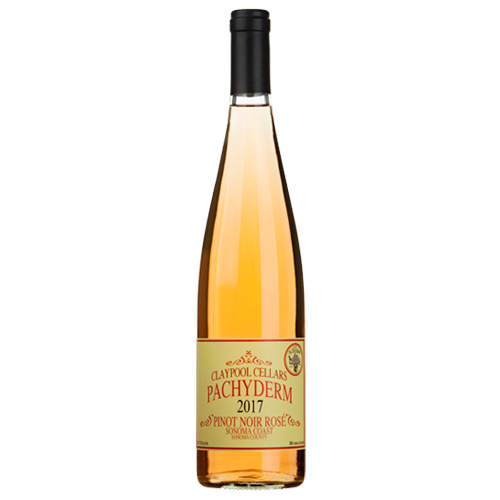 In 2016, Purple Pachyderm released its Rosé. Our Rosé is made from fruit sourced specifically for the wine, which gives you a higher quality, well balanced, crisp wine. We use Sonoma Coast Pinot Noir fruit, which spends about 7 months in neutral pinot barrels, creating its beautiful pale pink color and adding more depth than stainless steel tanks.

Although our speciality is Pinot Noir, in 2016 that we looked into making a custom sparkling wine and in the end decided to go for the real deal--a proper Champagne made in France. 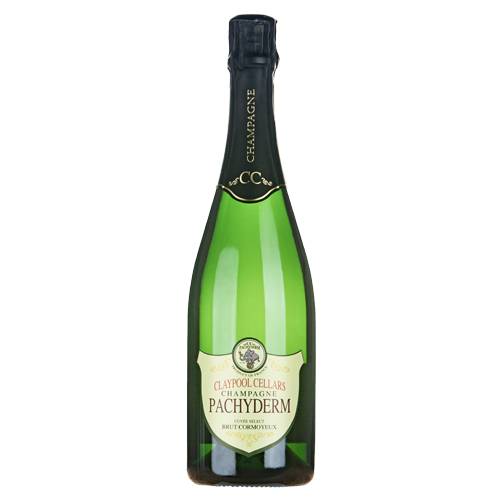 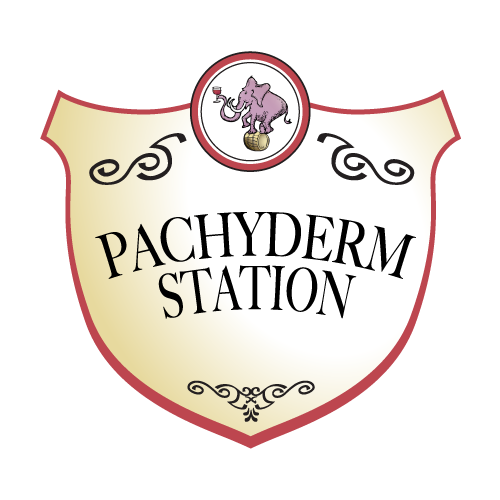 We purchased our current tasting room, at 5425 Gravenstein Hwy N, Sebastopol, CA which used to be a boat repair shop where Les would get work done on his boat. After a year of renovations and updates, we opened the doors in March of 2018. With more space than our previous tasting room inside the train caboose, we were able to take walk in customers and add more merchandise and display.

Katy and Ross ended their consulting business partnership, so all of our wines post 2018 are made solely by Ross. 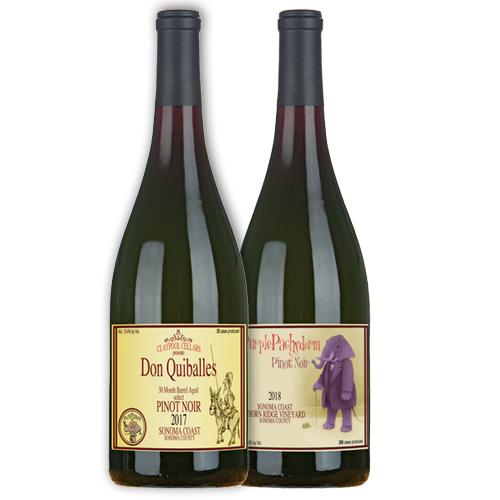 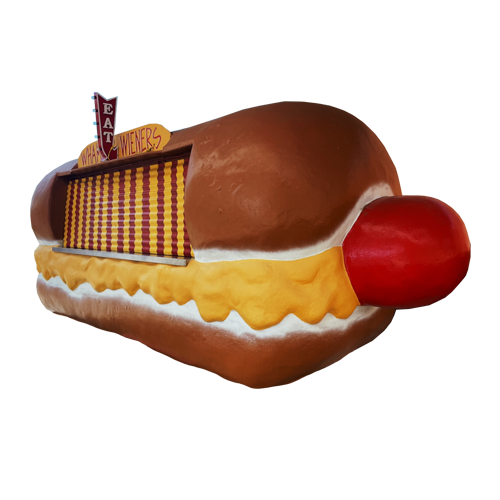 The pandemic forced us to close the tasting room, but we did add outdoor patio seating and also opened the Whamola Wiener truck at the end of the year! Les found the truck on Craigslist down in San Diego and we brought it up here and concocted some high end wieners that pair well with our Pinot.

We added a Riesling to our roster, from the Abagail Vineyard. 30 year old Zinfandel vines grafted to Riesling. Timing was perfect, as we weren't able to harvest any pinot noir in 2020 due to smoke taint from the wildfires, so we had a shortage of wine and were happy to add our first white wine to our list! 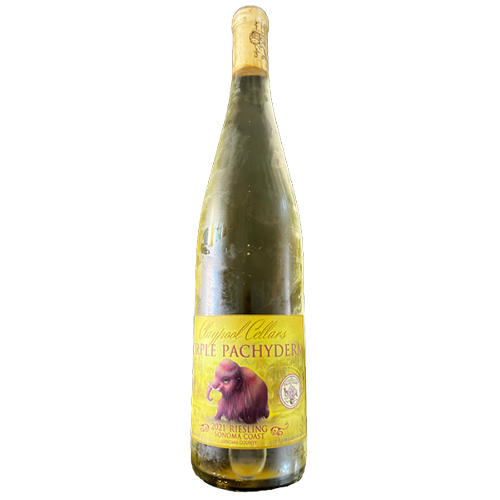